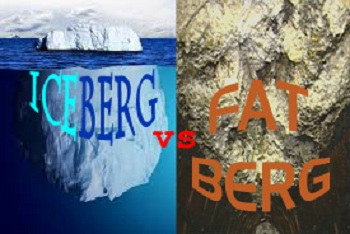 Coming soon to an ocean near you!

Oceanologists were said to be “totally stoked” today at the news that the massive new Antarctic iceberg will float into the mid-Atlantic just as the famous London “fatberg”, recently disgorged from the capital’s sewers, also enters the same region of ocean.

The iceberg has appeared from a 270 square mile frozen shelf which recently split off from the Antarctic Pine Island Glacier, while the fatberg is a fifty tonne dollop of accumulated human unpleasantness which nearly crippled the London sewage system. 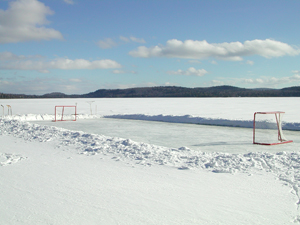 “We’ve learnt our lessons from the Qatar debacle”, insisted Sepp Blatter, “so to avoid the higher temperatures of the summer months, the Antarctican matches will be played in the winter.” END_OF_DOCUMENT_TOKEN_TO_BE_REPLACED 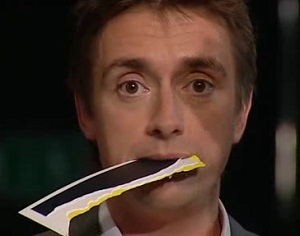 Presenter ‘basically a sausage and cardboard’

The BBC has again been forced to apologise for Top Gear, after it was revealed that Richard Hammond’s personality had been faked.

Hammond, a 4’9″ pile of crudely moulded spam, has been used by the show regularly to make up the number of oafs. But audiences weren’t explicitly told that he was a shaped heap of minced cheap cuts, a situation the BBC admitted was ‘regrettable’.

“When we agreed to Clarkson’s demands for a meat-based dwarf gollum, we didn’t think anyone would take it too seriously”, insisted BBC Apologizer Quentin Sharpes. “It’s pretty obvious it’s just made from hair gel and the eyes of a Slow Loris, topped off with a massively oversized watch.”
END_OF_DOCUMENT_TOKEN_TO_BE_REPLACED 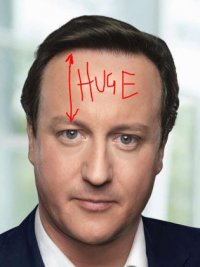 With the Everest route now easier thanks to the many fixed routes and improved oxygen technology, not to mention the detention of rock wielding Sherpas, top climbers have turned their attention to an ascent previously thought impossible – climbing David Cameron’s forehead.

Even getting to David Cameron’s forehead is a mission in itself. Climbers first have to get permission to summit Cameron which means a £15,000 access fee unless one is a high-ranking Tory or Rebekah Brooks. END_OF_DOCUMENT_TOKEN_TO_BE_REPLACED