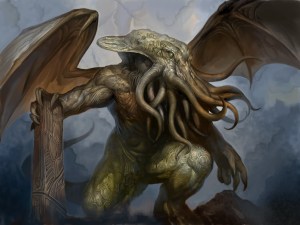 Cthulu: currently dormant and dreaming of reducing our sanity to ashes, and renationalising the railways

Former spin doctor Alastair Campbell has warned that voting for Jeremy Corbyn would be a “car crash, and more” for both Labour and the nation as a whole. Specifying that the “more” part would definitely involve the rise of Cthulu, the monstrous entity whose existence is beyond mortal comprehension and whose rise from the stone city of R’lyeh will usher in an era of madness that will destroy our minds along with  civilisation itself.

“I’m not being alarmist,” Campbell wrote on his blog. “This is fact. Corbyn equals Cthulu and I’ve got a very informative dossier to prove it.”

“With Jeremy as leader Labour will become an unelectable party of protest that insists the Chilcot Report is published, and summons Things We Can’t Wot Of. Obviously I’m far more concerned about the latter and barely think about the consequences of the former apart from every waking moment which is perfectly normal. I sleep like a log, you know, and so does Tony.”

He went on to urge voters to vote for ABC – Anyone But Cthulu – before pre-empting queries about what makes him such an expert on Lovercraftian horror by citing the company he kept between 1994 and 2005.