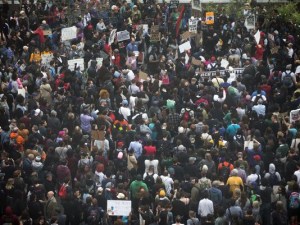 “Nothing brings an oppressed community together like the impending birth of an over privileged white child” one protester said.

“Sometimes you need wall-to-wall coverage of a princess’s childbirth to put things into perspective.”

Police in Baltimore had been criticised for cracking down on the street celebrations to ensure a 10pm curfew was upheld.

“It may seem arbitrary but this curfew and its enforcement is for residents’ own good” the city’s police chief explained.

“If people are on the streets celebrating, they may miss news of the birth. We can’t have that so its best they stay locked in their own homes until the royal baby arrives”

To mark the impending birth, police have promised not to be responsible for the death of anyone in custody for at least 48 hours.