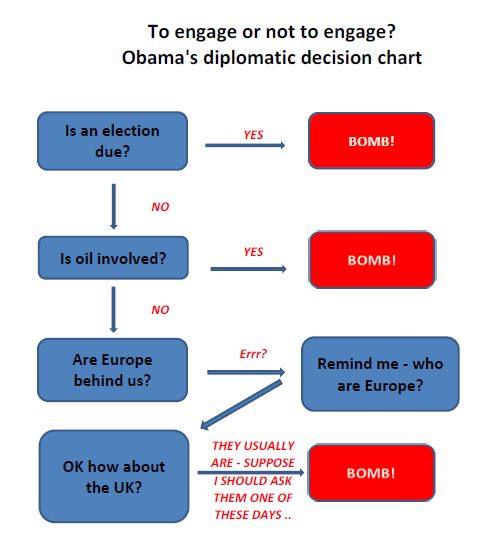 It has emerged that President Obama follows a simple decision chart when tacking tough diplomatic issues in potential areas of conflict.

Unlike previous presidents like Ronald Regan, who asked his wife’s astrologist, or Bill Clinton, who consulted whoever he was sleeping with at the time, Obama has modelled his chart on the past thirty years of US foreign involvement.

“The chart is deceptively simple,” said White House veteran, Walt Doopher. “Basically it comes down to US interests, and more specifically, the president’s interests. After that, nothing really matters.”

When it was pointed out to Doopher that the Europe had been included in the chart, he laughed.

“Yeah, Europe was included for diplomatic reasons in case it fell into the wrong hands, but it was really included as a joke, because Europe is a joke.”

“If you looked at Obama’s personal copy you’ll see he has added in pencil ‘Has anyone got Mr Europe’s phone number?'”

Comments Off on Revealed: How Obama solved the Iraq bombing dilemma