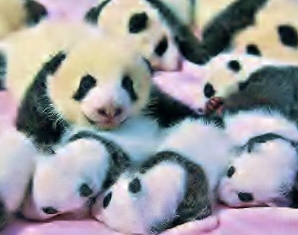 Although wildlife experts were horrified at the loss of the panda colony, a Defra spokesman tried to put a positive spin. ‘This is good news,’ he said, “because we had no idea there was a flourishing panda community in the West Country. Of course, it’s probably not flourishing now, but it’s nice to know that it had been there.”

“There was an initial problem with the training,” admitted Rodney Henge, day time vigilante and night time badger culler. “At first we just fired at anything that was black and white. We thought the pandas were just obese badgers, until someone said something. Now that we know how rare they are, or were, we’re hoping for some kind of bonus.”

Henge admitted he had regrets. “The destruction of the piano was a pity as it could have been restored. Unfortunately, in the moonlight its gleaming black and white keyboard simulated the approaching foreheads of an army of badgers so we had to let go with the machine guns.”

The Defra spokesman was less concerned about the nuns. “Nuns tend not to breed enthusiastically so they would have died out eventually. There are very few in the wild these days. Most of them are kept under lock and key in nun prisons, known as convents.”

“And the Goth was probably a Glastonbury leftover,” continued the man from Defra. “Goths are creepy buggers and they spread diseases and misery far and wide. The goth vaccination programme failed so I’m sure shooting them is OK. It’s the sort of thing they enjoy anyway.”