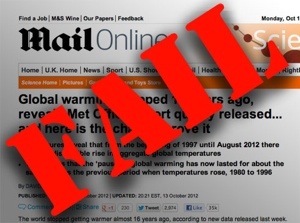 With the influential report from the UN climate panel giving the strongest suggestion yet that climate change is a reality, the Daily Mail has rubbished the evidence saying it refuses to answer the key question, why does it still snow.

“We accept that this paper is one of the most peer reviewed in history” the Daily Mail’s Paul Dacre said. “And it has been written by hundreds of different scientists using experiments and data that are indisputable, but last week we had to put the central heating on. In September for God’s sake”

The report, that is the most comprehensive on the subject, also gives the strongest possible indication that climate change is man-made and is a bigger problem than people care to admit. But again Mr Dacre told us of his skepticism over the results of climate change.

“Let’s say humans are responsible for the oceans warming slightly, anyone with kids will tell you the pleasure to be had walking into the ‘small pool’. That has been warmed by humans, but doesn’t do anyone any harm.”

Mr Dacre is not the only critic of the report. As soon as the Mail Online reported on the panel’s findings, hundreds of readers took a few minutes away from YouTube to share their views with the world.

SwivelEyedAndProud said: “as long as snowmen exist, then so does my denial of global warming. Do Eskimos wear bikinis?”

And Arrrggggghh added: “this is what happens when you give foreigners an opinion. They come over here, take our jobs, bringing their indisputable evidence with them. I’m sick of it.”

Asked if the Daily Mail will accept climate change exists when East Anglia and Cornwall are under water, Mr Dacre said: “believe it or not, nobody wants global warming more than us.”

“I mean, the hotter it is out there, the less clothes celebrities wear, making our sidebar of shame hotter than not only the sun, but also The Sun.”

Comments Off on As UN report proves global warming exists, Daily Mail asks ‘why does it still snow?’