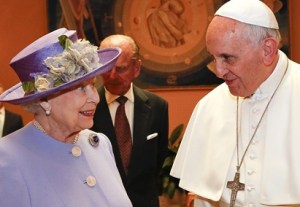 “Let’s hush this up, Queenie baby!”

The myth that Christianity is a peace-loving gentle religion was shattered today after moderate Christians the world over pointedly failed to condemn extreme Christian terrorists who shamefully massacred several people in Colorado.

Instead of sending out a strong message to the faithful, Christian community leaders chose to implicitly support the Colorado massacre by their refusal to denounce it.

One Christian leader, Her Majesty Queen Elizabeth II, head of the murky “Church of England”, claimed she was too busy ruling her people to comment, but it was “nothing to do with one”. END_OF_DOCUMENT_TOKEN_TO_BE_REPLACED