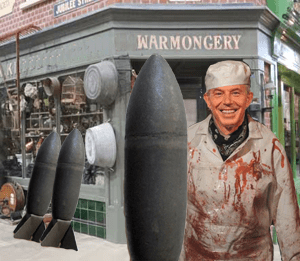 Tony Blair has moved to Harold and opened a traditional little warmongers, with organic biological weapons and free-range dossiers a speciality.

But locals are worried that the business could affect house prices, particularly if a bomb should go off.

‘Deng of Iniquity: Warmongery to the discerning despot’ has taken over the premises of Harold’s cancer research shop. It’s also been knocked through to the neighbouring chippy, after Blair heard that ‘The Stephen Fryer’ held large stocks of oil.

Some residents have been more welcoming to Blair than others; Cllr Ron Ronnson was one of the first to greet him. “Lovely to meet you, did you bring any money?”, Blair joked. “I won’t shake hands if you don’t mind. I’ve got blood on them.”
END_OF_DOCUMENT_TOKEN_TO_BE_REPLACED 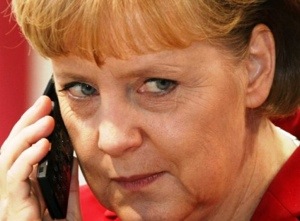 President Obama defended hiring Rupert Murdoch as his communications officer after it emerged the US may have been hacking Angela Merkel’s phone.

President Obama had phoned the German Chancellor to discuss the issue and left a message, however she has denied receiving it. But Obama is adamant he left the message on her voicemail.

“I was shocked to hear the message I left her may not have recorded properly so I got Murdoch to check for me” Obama said.
END_OF_DOCUMENT_TOKEN_TO_BE_REPLACED