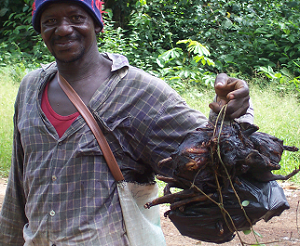 Risky, but at least it’s not salad.

A nurse who was cured of ebola, only to contract it again on returning to Scotland, has urged Glaswegians to stop eating bush meat.

Morag McClough had been working in Sierra Leone when she first contracted the disease, where she was treating people who had been infected after eating tainted chimp meat.

But after being cured, McClough caught it again on her return to Glasgow, possibly from a very, very similar source.

“That’ll teach me to forage for native species, armed only with a blow pipe”, quipped McClough. “But in all seriousness, I only ordered a skinny capuchin without any shots, from a slightly dodgy-looking street café.”
END_OF_DOCUMENT_TOKEN_TO_BE_REPLACED 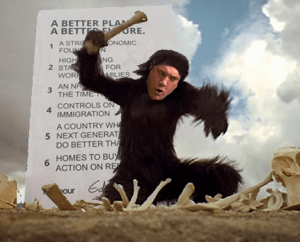 Shadow Chancellor Ed Balls has finally been spotted in public, running in a loping gait and clutching a femur.

In a security lapse, Balls slipped into an area where the press were present, and touched a mysterious stone monolith left there by a weird alien.

“At that point, Balls made a startling transformation”, one reporter told us. “He stopped flinging his muck, and demonstrated rudimentary tool use.”

The reclusive ‘attack chimp’ first used the bone to scratch at his bottom, before stoving in the head of someone who looked a bit ‘wealthy’.
END_OF_DOCUMENT_TOKEN_TO_BE_REPLACED