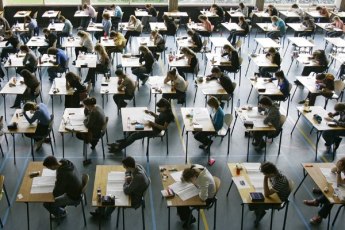 A Harold head teacher  has spoken out in defence of the new SATs – described by many as being unnecessarily stressful, pressured and far too advanced, and which reduced some students to tears.

St Mary’s Alison Lee, however, thinks the paper was no more difficult than it needs to be to prepare students for life in current society.

“Parents think that being engaged, inspired little learners will be sufficient for their offspring to succeed, but they’re living in a dream world” said Mrs Lee.

“What sort of mind do you need to have to be able to argue that a super-injunction should hold, even when everyone knows the details of the story in question? How adept at convoluted maths must you be to complete a Panama Papers tax return? These are not skills that are garnered without effort.”

Whilst others in her profession have taken to Twitter to lambast the government, Mrs Lee is confident that that the new SATs will produce exactly the sort of pompous, misogynistic politicians required to carry on the legacy of the current lot.

“Take this passage from this morning’s paper as an example” she said:

“Mary and Oliver were on safari, when they saw a herd of wildebeest chasing a giraffe. Mary wanted to help, because she’s a soft girl. Oliver loaded his gun and shot the wildebeest and the giraffe.
Question one: Should Oliver have shot Mary too? How would that have made you feel?
Question two: Who is PJS?
Question three: Is it more harmful to the environment to frolic in olive oil or to kill wild animals?

“There are no marks available for students who indicate any sympathy for Mary or cry at the death of the creatures” noted Mrs Lee. “Extra credit is available for boys, and for anyone who suggests the right sort of ammunition for Oliver to use.”

And as to the answer to question two? Mrs Lee is “not at liberty to say until all SATs are complete” although she accepted that anyone with access to the Internet, or a friend north of the border, would be well aware of the details.

“Like I said”, she acknowledged with a shrug, “weasel ways are the life skills of the future”.

Comments Off on “Who is PJS?” SATs question raises more security worries for DfE