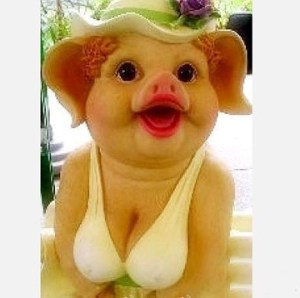 “I first met David when I was hired to be the centrepiece at a swine and cheese party back in the 80’s”, she began.

“At first he barely looked at me, preferring to mingle with the young, attractive cattle and sheep in the room. But as the drinks flowed, I noticed he was staring across at me. I was wearing a very flimsy, low cut outfit which nicely showed off my top four cleavages.”

“David sidled up to me with a bottle of champagne, two glasses, and a dangerous look in his eye. He told me of his desire to stroke my ribs, kiss my tender loins and to stuff me full of mustard sauce.”

“At first I resisted, especially when he suggested I go with him for a spit roast with his tousled haired friend. But the champagne did its work and the last thing I remember was lying on the table with his big shiny red apple moving towards my face.”

“It was my first experience of salted tongue”. She said, wiping a tear.

“After that night I never saw him again. I sent him letters and followed him to his backgammon club, but he had moved on by that time to a rich young filly from some wealthy Lincolnshire estate.”

“I did get one small thank you note though some years later when his main political rival was brought down by a bacon sandwich, but otherwise, not a squeak. Oinker!”.

Margaret now lives with her litter of 12 piglets who she has named after the cabinet front bench, in a small flat in Cockermouth.

One Response to Pig reveals all in kiss and tell exposé