Stephen Fry, Robert Mugabe and The Queen among this year’s Strictly Come Dancing line up. 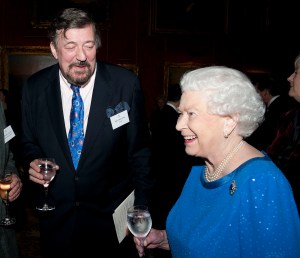 The Queen of England and Elizabeth Windsor

The BBC has announced the first contestants for this year’s series of Strictly Come Dancing.

Among the notable celebrities are some big name attractions including Robert Mugabe, Josef Fritzl, The Blessed Virgin Mary, new Taliban leader Mullah Akhtar Mansoor  and Les Dennis along with some more controversial choices including Jeremy Vine, a woman off Eastenders and troubled tv chef, Ainsley Harriott.

The big coup this year however is the inclusion of national treasures, Stephen Fry and Her Majesty the Queen.

The Queen was said to be a big fan of the show and is believed to be ‘Cock a Hoop’ at being asked to take part, while Mr Fry is said to be looking for a new agent.

Confirmation of the final contestants is expected later this week, with theoretical physicist Professor Stephen Hawking as the early bookies’ favourite.

Comments Off on Stephen Fry, Robert Mugabe and The Queen among this year’s Strictly Come Dancing line up.