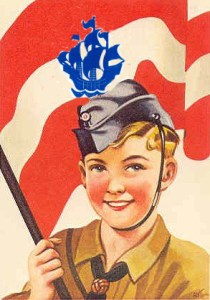 Flag made from sticky backed plastic and a pair of Val’s old knickers.

BBC bosses have announced a children’s spy competition in conjunction with MI5 to find kids with the right ‘attitude and qualifications’ to lead the new Blue Peter Youth movement.

The Blue Peter Youth is being set up as a social initiative to encourage children to take part in local activities such as collecting milk bottle tops for charity, dog walking, racism, and bracing outdoor activities like cycling, hill walking and book burning.

They will also assist with community projects taking meals to the elderly, collecting paper for recycling from the dustbins outside mosques and helping foreign looking undesirables to ‘disappear’.

A cartoon serial featuring the characters ‘British Mouse and Foreign Mouse’ will be shown to encourage children to check their parents for any signs that they may be ‘educated. left leaning liberals who eat hummus and wear chunky sweaters’ because they’re probably terrorists and should be reported immediately to the local Blue Peter Commandant.

Children who join the Blue Peter Youth will be issued with a free brown uniform, instructions on how to use electrical flex to obtain confessions, and a rather nice badge with a boat on it.

Jewish children’s author Anthony Horowitz who helped launch the initiative was unavailable for comment today as he is presently on a train to a holiday camp on Dartmoor with several thousand of his relatives.