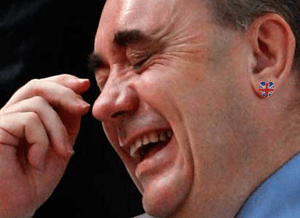 What’s more, the NHS will continue to be poorly run in the country, a key pledge Salmond has stood by thoughout the campaign.

“People of Scotland, welcome to our brave new world!”, boomed Salmond. “We can now honestly say we’re a proud, semi-independent country. And I’m pleased to have had a role in negotiating England’s surrender.”

Asked if he felt ‘humbled’ by the enormity of his success, Salmond flicked through a dictionary, before punching the journalist in the face.

“To quote William Wallace in the documentary Braveheart”, said Salmond: “They can give us a lifeline, but they can never give us…our FREEDOM!”

One Response to ‘See? I told you we’d keep the pound’ brays Salmond