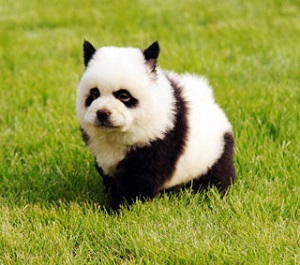 Edinburgh zoo is celebrating their first panda pregnancy, after doctors substituted the female with a spaniel in heat.

Tian Tian had initially appeared reluctant to mate with the male panda, Yang Guang. But by pioneering a technique that saw the female bear trapped under a bucket and replaced with a smallish three year-old dog, experts hoped to dramatically increase the chances of conception.

Expert Brian Sweeney explained that it hadn’t all been plain sailing.

Sweeney is proud of his team’s success. “It’s a controversial technique, but we stand by the little sign on the cage”, he said. “And that sign clearly states they’re ‘pandas’. And there should be nine more of the little critters soon, if my entry in the sweepstake is anything to go by.”