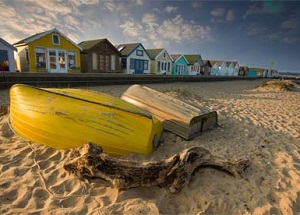 A shocking rise in the number of UK beaches that have become ‘clean enough to holiday on’ is being blamed on man-made global warming.

With dryer, warmer summers leading to less run-off into coastal areas, some families fear they could soon find themselves vacationing in Rhyl.

“It’s a vicious circle”, complained David Evans, occasional holidayer and amateur climatologist. “Our carbon emissions seem to be causing ever more barbecues on the beach. I don’t want to alarm you unnecessarily, but I’ve drawn a graph to show the trend. By 2020, even Blackpool could be largely turd-free.”

The news that British resorts will not only be hot and sunny but also marginally less toxic comes as a bitter blow to Britain’s beleaguered bargain bucket-shop beach bums.

“Talk about an ‘inconvenient truth’, I’ve always managed to talk the family out of going to Southend”, said Evans. “And this year, I had my heart set on an all-inclusive deal in Bali. But flying the whole family 3,200 miles is only going to make matters worse. At this rate, we’ll be considering a static caravan in Skegness.”

Evans hopes to persuade his family to carry on holidaying as normal, and pretend that the catastrophe isn’t happening.

“I’m determined to get into Thomas Cook and book something distant and exotic. I’ll do that, as soon as the coast is clear. Damn. Did I say ‘clear’? I meant ‘littered with needles and condoms’. The government should ship some of those in, if they want us to stop taking global warming seriously.”

Mr Evans is considering walking more, insulating his loft and buying a smaller car, in order to reduce his carbon footprint. “I suppose I knew deep down that I ought to do my bit, but this sort of thing really brings it home. How can we explain to our children that we did nothing, and that’s why they’re eating whelks while sat on a donkey in Bognor Regis?”

Comments Off on Global warming blamed for Britain’s clean beaches