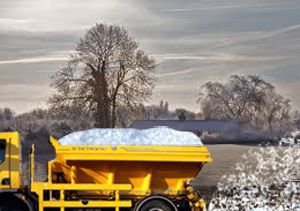 Britain could boost its Olympic medal tally today, after breaking the track record in the Pointless Road Gritting Relay qualifiers.

With the UK team deploying grit to tackle everything from high winds, fallen trees and silted-up rivers that used to be motorways, few countries look like they have enough in the tank to really threaten for gold.

“When the chips are down and the elements throw everything they have at us, only the British show this level of resolve”, said head coach Nigel Withers. “No matter what the temperature or road conditions we only know one thing and that thing is this: driving slowly in a lorry with all the yellow lights on and spraying everything with small rocks until we’ve won.”

In the semi-finals Britain easily beat France, in the tricky ‘an artic has fallen over’ freestyle. “The old enemy deployed cones and a gendarme with a radio and a flashlight”, said Withers. “It was textbook, so we knew we had to dig deep.”

“But we’ve been here before and knew what to do. We drove slowly past, switched the spinny thing to full power and sandblasted the skin off his legs and smashed the windscreen of his patrol car.”

The British team has been in training throughout the summer, gritting the M1 even in 30 degrees of heat. “We claimed it was because the tar had melted, but it was all a clever bluff”, said Withers. “We just like pebbledashing Audis when they sit on our bumper and flash us.”

The gritters have shown astonishing camaraderie in the Olympic Village, offering support to other members of Team GB. “Lizzie Yarnold went faster than anyone has managed before in her first run of the Skeleton luge”, enthused Withers. “I told her that I couldn’t see anyone else coming close. Particularly as we gritted the course as soon as we saw how icy it was.”

Withers and his team have been praised for their unconventional tactics, judges were particularly impressed that they attempted to use rock salt to deal with fog.

“The rest of Europe is way behind with their insistence on being properly prepared for winter”, said Jorgen Frewald. “When it’s mild, we’re completely at a loss. But you lot stick doggedly to the same plan, even when it’s 10 degrees above freezing. No wonder you’re coping so well with the floods.”

One Response to High hopes for Olympic gold in road gritting