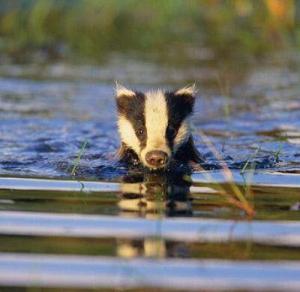 While floods continue to cause misery for the people of Somerset they have proved to be extremely good news for badgers whose population is not just thriving and growing but to the surprise of naturalists becoming tool-using.

“We owe it all to Owen Paterson,” said Manky Dave, spokesbadger for the Stoke St Gregory badger colony. “If the Secretary of State for the Environment hadn’t been so intent on killing us then we would never have upped our game. He shocked us out of our complacency and forced us to adapt. Cheers Owen! Come see us some time, we’ve got a surprise for you.”

Humans living in the worst hit areas for flooding have reported numerous sightings of badgers on rafts with some even getting about on what appear to be rudimentary punts. Though claims of seeing them using canoes have been dismissed as nonsense on account of the stubbiness of badgers forelegs not lending themselves easily to stretching wide and using a paddle.

Now that badgers have made such an extraordinary evolutionary leap we asked Manky Dave what the future held for them.

“Once the waters go down and things return to normal the badger community will be looking to get proper representation and have our own councillors and MPs.”

When it was pointed out to him that tool-using English-speaking badgers seemed unlikely politicians he smiled and replied:

“Look at some of the grotesques you currently have in Parliament. A lack of humanity is clearly no bar to getting in.”