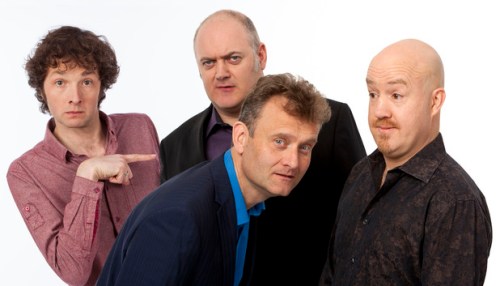 Fingers pointed at Mock The Week

As embittered former Home Secretary David Blunkett calls for satirical television programmes such as Mock The Week to face tougher scrutiny from libel lawyers, other sourpuss victims of the BBC show’s lazy humour are urging government media watchdogs to go further and investigate the ‘suspicious’ scoring system used by the BBC on the show.

An unlikely ‘Coalition of the Mocked’, including pop-star Justin Bieber, former deputy PM John Prescott and Muslim cleric Abu Hamza have called the show’s integrity into question and say that point scoring is arbitrary at best, and at worst could be fixed, which would ‘seriously undermine viewer trust in the Corporation’.

Media insiders say that the BBC, already reeling from the controversy over executive pay-offs and the Jimmy Savile scandals, will do anything to avoid another parliamentary enquiry and are doing their best to block this, but they could be powerless in the face of a damning dossier prepared by the group.

‘Every time Dara shouts “Points go to Andy, Mark and Russell!!!” we asked ourselves “Has it been made clear how many points?”, “Are there clear criteria?” and “Is there a transparent system for keeping track of these points?”, and on too many occasions, the answer was no,’ explained Egyptian-born Imam, Abu Hamza al-Masri from his US prison cell, where he awaits trial for terrorism charges.

The controversial preacher, who is often mocked on the programme for his blindness in one eye, and his prosthetic “hook” hands, went on to say, ‘Viewers, families, may be having small bets to make the show a little more interesting, but if they knew the result was arranged in advance, it would destroy the credibility of the programme, and the BBC. We are all appalled.’

The dossier also looks at how Hugh Dennis always seems to be able to get the answer correct straight away in the Headliners round when Dara decides to ask for the real answer, and how in the Spin The News round, the so-called “Random News Generator” always seems to deliver topics that are in the guest comedian’s stand-up routine.

BBC officials dismiss the claims, however, saying that the research in the dossier was ‘rougher than Abu Hamza’s iPad screen’, ‘more bloated than Eric Pickles’, and that if the enquiry went ahead, the only real winners would be Hugh, Chris and Milton!!!