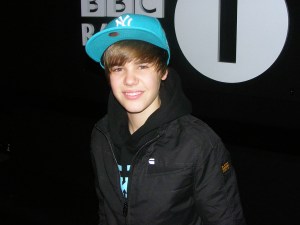 Warning; This boy may harm you and others around you.

BBC Radio 1 have today had to deny claims they are being cruel and insensitive, and refused to back down from a decision to play the music of Justin Bieber. The move comes as people who remember the 1980’s and early 1990’s mourn the death of decent music.

The BBC in defending their position have told us they ‘have a duty to play the music people are buying, even if those people are under the age of 16 and have no idea what they are talking about.’

However, not everyone has been critical of the BBC. Sally Moody from the ‘OMG Justin Bieber, We Love You’ fan club told us “the BBC should play Justin all day ‘cos he is lush.

“I don’t remember what it was like when Oasis were in power, but listening to Justin, no matter how sick it is, is my way of protesting about something they did. Yeah that’s it. Definitely. Maybe?”

This is not the first time Bieber has caused controversy this year in the UK. He let down tens of thousands of people who attended his concert at the O2 Arena in London by continuing to assault their eardrums despite being ill. Doctors at the venue had warned that returning to the stage could be ‘damaging’ to the long term health of those in attendance.

In a tweet to his fans, Bieber has pleaded with them to be respectful and allow people to mourn the loss of music with dignity, before adding that half profits from his latest single will go to the ‘Brit Pop Benevolent fund.’

In a statement, the BBC have said they may compromise and only play Bieber as part of a ‘news feature’ That news feature is expected to be three minutes long and about the irritating nature of saying the word baby over and over again.