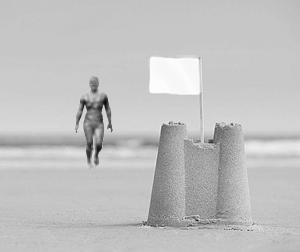 The sandcastle didn’t provide enough protection, so they decided to surrender

Francois Hollande has stepped down as President with immediate effect after France surrendered unconditionally to a cross-channel swimmer.

Andrew Smith, from Basingstoke, completed the swim to raise money for charity and was stunned to be confronted by the entire French military, waving white flags, when he arrived just outside Calais. END_OF_DOCUMENT_TOKEN_TO_BE_REPLACED

Comments Off on France surrenders to cross-channel swimmer 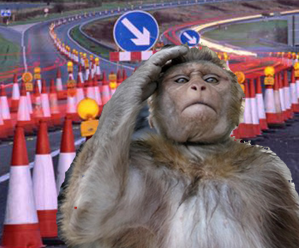 The Highways Agency has announced that it will employ a team of brain-damaged monkeys to take on responsibility for organising maintenance of Britain’s motorway network, a move expected to greatly improve the planning of roadworks. The announcement comes after red-faced officials realised that they had accidentally closed every road out of Birmingham at the same time for three whole days without giving any warning.

‘An angry motorist called us to complain that he had ran out of petrol on his third lap of the city of Birmingham, after moving from one diversion to another and finding every road out was closed.” said a spokesman, who also confirmed that the man had been fined £60 for using a handheld mobile phone while driving, despite being in a stationary vehicle.
END_OF_DOCUMENT_TOKEN_TO_BE_REPLACED