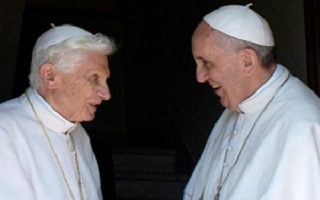 Back from the dead?

Concerns were expressed last night for the health of Pope Francis after he was seen struggling for breath during an Ash Wednesday mass at St Peter’s Basilica.

The Pope, 77, was seen in difficulties shortly after the start of the service and had to cut his sermon down to a mere 75 minutes.

Questions about his health have seriously raised the possibility of the return of Pope Benedict who resigned the papacy only last year, ironically due to health issues. Vatican insiders have suggested that Francis may be forced to take a break whilst he regains his strength, which has paved the way for a symbolic resurrection for Benedict in time for Easter.

Whilst Francis was portrayed as a vigorous youth when compared with his predecessor, it has to be acknowledged that in civilian life he would be regarded as an old codger who spends most of his time in post office queues grumbling about Eastern Europeans. END_OF_DOCUMENT_TOKEN_TO_BE_REPLACED