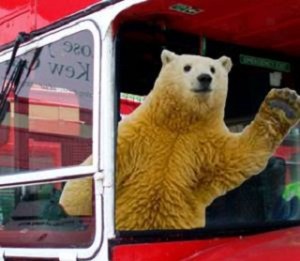 Driven by the threat of the melting Arctic ice cap, beleaguered polar bears are being forced to abandon their natural habitat and adapt to new environments.

Many of the highly intelligent creatures have migrated to North America where, after a quick makeover, they are integrating into the native Brown and Grizzly Bear population. Others, as they head south, are finding themselves on the shores of Scotland where they are quickly settling into local communities.

The bears seem to have been able to slip into the country with little difficulty. “Poles, polar bears, and Romanians. They’re all the same as far as I’m concerned,” said one immigration official. “If they’re white, hairy and speak unintelligibly, they have to be allowed in.” END_OF_DOCUMENT_TOKEN_TO_BE_REPLACED