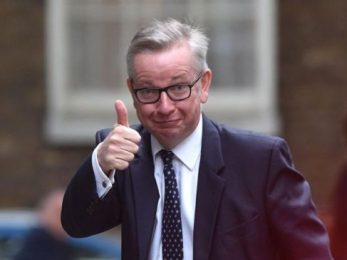 “Watch out for that massive tub of beer, Michael!”

Michael Gove is said to be “serious but stable” in hospital, after being dusted with salt in a pub garden accident.

“A customer was adding salt to their chips, when the lid of the salt cellar suddenly came off and a cloud of salt flew across the table.” explained Eddie Grudgingly, landlord of the Squirrel Lickers Arms in Harold.

“No one else was affected but with Mr Gove it was really weird. His body became really shiny, then he began to froth at the mouth and ooze out of his suit.”

Gove’s wife, the self-effacing Daily Mail columnist Sarah Vine, will visit him in Dunstable Royal Infirmary, just as soon as she files three 1500 word pieces on how this might affect her sex life.

“It’s rather ironic.” she said “I understand Michael had only just missed being accidentally pushed into a huge tub of beer, which was sunk in the edge of the flower border.”