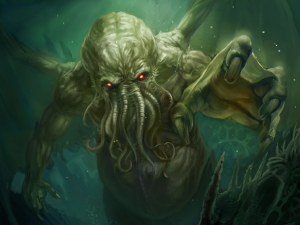 Behold its soulless eyes and wonder how it is they convey more empathy than Philip Hammond’s.

Monstrous entity whose existence is beyond mortal comprehension and massive Ed Sheeran fan, Cthulhu, has risen from the stone city of R’lyeh to cast its vote for the Tories.

“It will be easier to usher in an era of madness that will destroy minds along with civilisation itself when there’s no NHS or hope,” Cthulhu said. “And the delicious damage their hopelessly flawed and selfish Brexit negotiations will do to ordinary people almost make it not worth me sticking my tentacles in.”

“Mind you,” said the Great Old One whose twisted features come from a nightmare of hell itself and who mated with its own sister. “When I look at the Tory front bench I don’t half see a lot of freaks.”

One Response to Cthulhu rises in order to vote Conservative