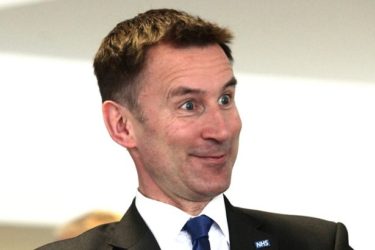 Hunt; just before the psychiatrists and Approved Social Worker arrive

Jeremy Hunt says up to date NHS finance reports would have been published before the election, but for the fact that they show how useless he is.

“Compared to how I’m doing, my  marmalade exporting  was a fantastic success. So you can well imagine why I’m keeping this dreadful key performance report under wraps!” he added.

The government usually publishes such data promptly but it fears the sensitive nature of this information might influence the outcome of the election.

“It’s a bit like seeing the recent service history of a car you’re thinking of buying” explained the Health Secretary, as if speaking to a five-year old; think Diane Abbott but without the charm.

“Imagine you see the brakes are worn, the tyres are bald, the engine is knackered;  in short, the whole thing needs rebuilding. Well, you’re not going to buy it, are you? In those circumstances, a wise used-car salesman will suggest you look at the shiny advertising blurb instead, or to put it in electoral terms, the manifesto.”

“I hope this scotches the rumours that publication is being deferred for any underhand purpose and that the reasons are now crystal clear to everyone.”