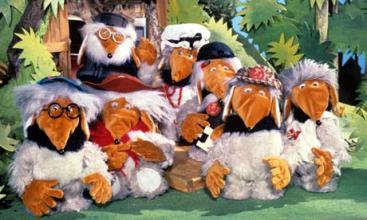 Bloody foreigners, coming over here taking our litter and tidying our commons….

Nigel Farage is insisting that under Brexit the UK’s favourite mostly immigrant litter-picking team will lose access to their Wimbledon Common home.

“This is a furry swarm of unskilled economic migrants who’ve arrived uninvited in this country and have made no effort to integrate with British society,” Farage said. “They’ve come from as far away as China and the Amazon basin to take advantage of our benefits system and our way of life. Especially the part where decent Brits enjoy covering their country in rubbish which is our right and one we fought WWII to uphold.”

“We must also consider the crime aspect. One of this mob is a not only an elderly BBC star whose show appealed specifically to children but also Bulgarian,” Farage continued after pausing to wipe the spittle from the corners of his mouth. “I’m sure you don’t need me to connect the dots there. Oh, and Djokovic can sod off too.”

“It is especially important to get them out of Wimbledon which is a lovely area and should be for white people, I mean British people. Oh no, I’ve done it again, haven’t I?

One Response to Wombles to lose Wimbledon Common access under Brexit