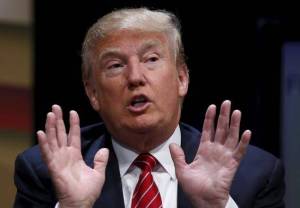 Easter is a time for remembering that Muslims killed Jesus, according to Donald Trump.

“People ask me why I don’t like Muslims, and I say ‘duh’, it’s because they nailed Jesus to the cross with those Muslamic nails of theirs. Page 545 of the Bible I think it is, there in black and white, Muhammad Pilate and his henchmen killing Jesus.”

“I don’t hear other candidates reminding Americans that Muslims killed Jesus. Is this yet another thing Hillary has conveniently forgotten? Lyin’ Ted Cruz says he’s a Bible man but he hasn’t mentioned it either – has he even read page 545??”

Trump’s comments saw his popularity soar to new highs, and it now seems increasingly likely that come November, the White House will turn a hideous shade of orange.