John Lewis inundated with requests to send relatives to moon 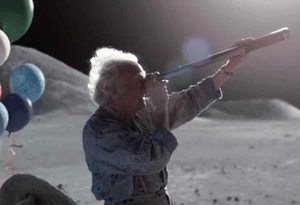 “You’re right dear; the turkey does look a bit dry.”

Balloon sales at John Lewis have gone through the roof, thanks to an advertising campaign to send unwanted old people to the moon.

With the moon now reachable using just helium and ribbons, nice middle-class families are hoping for a relatively relative-free Christmas.

“I was dreading another year of having to ignore rude comments about my cooking”, said Pippa Delaney. “But with nan approximately 385,000 kilometres away in a prograde elliptical orbit, we should be able to stand for the Queen’s speech in silence this year, without anyone calling her a slut.”

The children of Harold won’t have to pretend to be pleased with their Boots vouchers, and no-one will feel awkward if they decide to visit the church.

“I’ve popped a telescope on the tower, so I can give them a wave on Boxing day”, Delaney explained. “It’s better than Skype, because you don’t have to listen to them pretending to miss you. And then I’ll be back to earth in plenty of time for New Year’s Eve. They can get stuffed if they think I’m babysitting again: I’m going out to get pissed.”

Filed under Around Harold, Christmas, Media