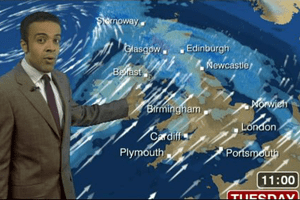 The BBC’s extensive archive of weather reports has been bought by a channel for people with head injuries.

Dave, which repeats everything from topical news quizzes to old episodes of Crimewatch, can now exclusively show the BBC’s best guesses at what the weather was like a few years ago.

Making a welcome return to our screens will be John Kettley, Michael Fish, and the one with eyes like a horse’s before he had a beard.

The move is expected to be popular with people planning last year’s holiday.

“I love watching the weather, it makes me feel nostalgic”, said Harold’s Elsie Duggan. “But it was so much better 13 months ago. Of course you wouldn’t know from the forecasts: they were very highbrow back then.”

“If you ask me, they dumbed it down when they stopped doing the fahrenheits.”

With old weather joining Dave’s line-up, most viewers are convinced it’s still last year, or a bit later than that if they’re watching Dave +1.

“I don’t remember this episode, though”, said Duggan. “That man just said it’s going to snow in Christchurch. Wait a minute, which channel is this? The BBC? I’m not watching this, they show last week’s forecast from New Zealand.”