Gove on outdated legal system failing the poor. “Hang on, that’s my job!” 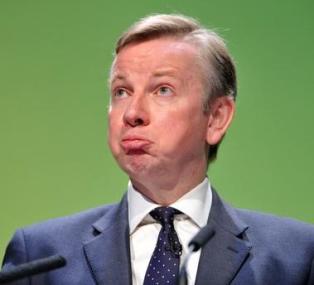 One thing I learned as Minister for Education was…err…

Letting down the poorest in society should be left to politicians with a proven track record of doing so, thinks Michael Gove.

“If there’s one thing I learned as Education Secretary… two, take away one … yes one thing” said the justice minister yesterday “it’s that you can’t simply let so-called professionals run things. A politician like me, with a fresh new approach – pardon?- well yes, untrammelled by previous experience in the field is another way of putting it – can often makes things better.”

Mr Gove is particularly concerned that there are effectively  two systems of justice in the country. “One Gold Standard, for the rich and well connected and another for those without financial means or influence. That is completely unacceptable to this Conservative government and we will now consign it to the history books”.

“We will rationalise things to create one simple, uniform system across the country.” he promised his audience, adding with a flourish “My predecessor Chris Grayling made a good start by slashing legal aid and decimating support services for domestic violence victims; it now falls to me to finish the job and do away with justice for the poor altogether.”

Comments Off on Gove on outdated legal system failing the poor. “Hang on, that’s my job!”