“We’ll give the Tories a heart and Labour a brain”: Lib Dems in shocking journey to Oz 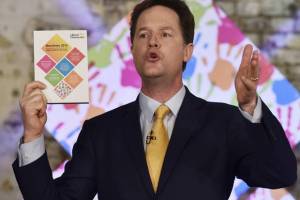 The launch of the Liberal Democrat manifesto ended in chaos earlier today when Nick Clegg revealed that he believes himself to be running for office not in England but in Oz.

Looking fetching in a lion costume Clegg said that the Lib Dems should be part of a new coalition government as they would “add a heart to a Conservative government and add a brain to a Labour one“.

Clegg remains confident that if he follows the yellow road he’ll end up Deputy Prime Minister again even though the past five years clearly demonstrate that he has no courage.

Comments Off on “We’ll give the Tories a heart and Labour a brain”: Lib Dems in shocking journey to Oz