Electorate demands: ‘Can we see the real candidates now?’ 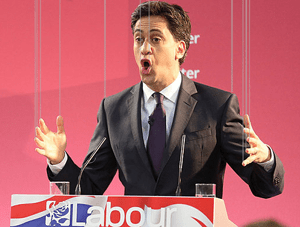 The man that does the lips previously operated Jabba the Hut’s ringpiece.

With less than a month to go until the most dismal general election for decades, voters are pleading with the establishment to show them ‘the proper candidates now’.

Fed up with a wall of cartoon morons who you wouldn’t leave alone with your children, voters think it’s about time they came clean and showed us the real people.

“They spend a lot of time trying to look normal, some of them even pretend to eat”, said Harold’s Pippa Delaney. “But you can tell they’re just puppets because their eyes don’t work properly.”

Concerns were raised when a still-crumpled Cameron was emerged from a box on a bus in Wales, and a muddled-up Miliband was filmed blinking with his mouth.

Other ‘scamdidates’ have been spotted walking just above the ground, and two Nick CLeggs appeared simultaneously in Dunstable and Grimsby.

“It’s lovely that they’re trying to make this fun, but the caricature of Farage isn’t fooling anyone”, Delaney went on. “And as for that Green Bennett woman, you can tell from her accent she’s from Fraggle Rock.”

Delaney told us she would welcome the chance to vote for someone more realistic. “You can see the strings on all of this lot: no wonder they’re predicting a hung parliament.”

Filed under Around Harold, Election 2015

One Response to Electorate demands: ‘Can we see the real candidates now?’