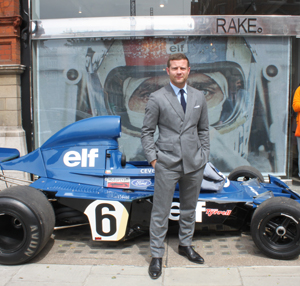 An inanimate object, in front of a racing car.

Evergrey favourite Dermot O’Leary has been chosen by the BBC to host a new show about the mundanity of transport.

Fun-tolerating Dermot, 61, welcomed his new challenge, and has pledged to own a car in the near future.

“A lot of the 350 million worldwide viewers of Top Gear were put off by its shameless entertainment, and that’s something I’m here to nip in the bud.”

Dermot is looking forward to presenting his update of ‘a star in a reasonably underpowered car’, where the aim is to use the least fuel in an unfilmed lap of the track.

“Litres per 100 kilometres. Who could fail to be excited?” yawned Dermot. “I hate Venezuelans. Can I have the job?”

Mr O’Leary has already filmed a ‘challenge’, where he has to traverse a desert in a car, with a glovebox large enough to hold an iPad, a charger and a packet of Dr Karg Crispbreads.

“He just stood there and smiled for six hours”, admitted a producer. “We had to cover him with a blanket when night fell, to stop the camels from licking him.”

Some fans had hoped that Guy Martin would win the role, but in a screen test he was pipped by O’Leary in the ‘Counting to 5,000 with a dramatic pause between each number’ test.

A Lego model of the empty husk of a presenter is already available, if you turn the hair round on any that you own.

Comments Off on Dermot O’Leary to host Bland Gear