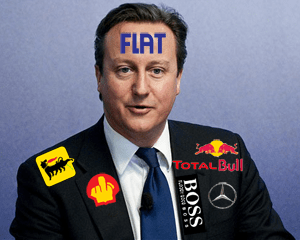 With the negotiations about a TV debate now more complex than the F1 rule book, politicians have been forced to seek sponsorship.

A particularly shiny PM was wheeled out to waiting fans, who couldn’t wait to tweet his new livery and nose around his rear. A precocious splitter was spotted, later identified as rival Nigel Farage, resplendent in traditional British Racist Green. Farage then held proceedings up braying about how nothing on earth would make him take ‘a Pole position’.

Ed Miliband decided to appear in a racy matt black livery and while he talked a good game at the time he’s since taken to social media to admit that the niqab was probably a mistake.

Nicola Sturgeon, the plucky privateer, went for a predictable saltire. After extensive training by David Coulthard, she was aiming to finish fifth. While the Greens were very bright when no-one else was talking but browned out when they opened their mouth.

Nick Clegg did not appear but we understand that he was seen earlier during a testing season: unsponsored, wearing a bin bag and some sick down his front.

Comments Off on ‘Will dissemble for cash’: Party leaders seek debate sponsorship