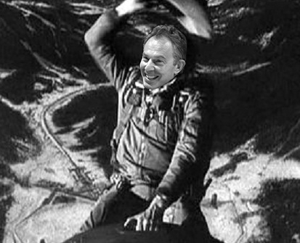 A children’s charity that presented Tony Blair with a Legacy Award has blamed the mistake on associations with a group advocating childhood bombing.

“Save The Children” is traditionally linked with preserving and improving the lives of children, a move clearly at odds with the achievements of the former Prime Minister.

“Sadly, we have somehow become entangled with the organisation “Bomb The Children”, admitted spokesman Eric Blunkett. “A charity that works tirelessly to drop heavy ordnance on towns and villages where young people live.”

“We’re not sure how this mistake happened, but on reflection we’ve agreed that bombing children is a mistake. Our latest research suggests it’s almost entirely detrimental.”

Save The Children has issued an apology for their mistake, and has chartered a plane to drop leaflets on those affected.

“We’re very sincere about this, we wouldn’t want anyone to think that those that run charities for a mere six-figure salary are in anyway corrupt”, said Blunkett.

“Although we’re hopeful the accuracy of our depleted uranium pamphlets will win us at least a couple of knighthoods.”