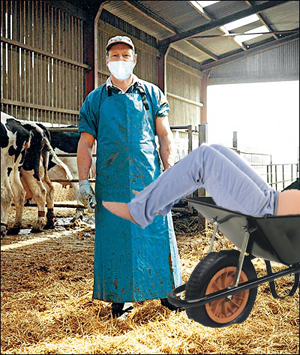 Patients can also choose not to be neutered.

Rather than expose patients to 15 hour waits in beleaguered A&E units, a NHS whistle-blower has revealed that some overstretched hospitals have been referring patients to veterinary practices for more immediate treatment.

Even more embarrassing for the NHS, internal surveys of customer satisfaction have shown that patients would rather return to the vet for further treatment rather than their local hospital.

Hospital executives have declined to comment, having been muzzled by government officialdom, however our investigative reporters followed several leads which took them to Harold vets, Wellington & Partners, who have been dealing with patients outsourced to them from the Dunstable Royal Infirmary.

“We’ve been treating NHS patients for some months,” confirmed Ivan Duke, who runs the veterinary practice in Waterloo Street. “At first we just dealt with coughs, and cuts and bruises, but now we’ve started providing additional services such as pregnancy clinics. We did try offering an allergy sensitivity surgery, but that was closed after we discovered that most of the patients were allergic to animals.”

“To be honest, there’s not much medical difference between animals and humans. We check the patient, clip their nails, worm them, then pat them on the head and send them on their way. And if they’re really ill, there’s not much you can’t cure with a couple of shots of amitriptyline.”

Carly Jeffery, who recently attended a pregnancy clinic, was full of praise.

“The facilities are much cleaner than the hospital and the treatment I received was first class, although I must admit I was a little surprised at first when Mr Duke confirmed my pregnancy by shoving his hand up my arse.”

Comments Off on NHS Crisis: Now overstretched hospitals are referring patients to vets