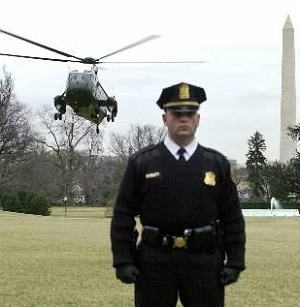 Wayne Derumbo, a white 29 year old US Park Officer,  who was on his first day of duty at the White House when he shot the President said, “I simply did what any officer would do and fired at the black guy as he arrogantly made his way towards Marine One. I didn’t like his attitude, you’d have thought he owned the chopper or something.”

“I followed the code and called out a warning, but the guy just grinned and lifted an arm almost as if he was waving.” said Derumbo unrepentantly. “I assumed he was reaching for a weapon and fired.”

As investigations continue, it seems amazing that any officer would not have recognised the President, but Derumbo maintained that he was a Tea Party supporter and therefore had little interest in politics.

Didn’t he realise that the smartly dressed Obama couldn’t possibly be a felon? “Well now you say that, I must admit it raised my suspicions,” said the trigger happy officer, “had he not collapsed, I would have asked him where he had stolen that suit.”