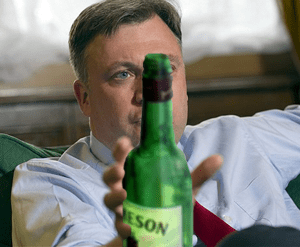 The spirit was right, if not the geography.

Ed Miliband unveiled a more Caledonian tint to his shadow cabinet today, in an attempt to win back Scottish voters.

Ed McBalls, showing signs of recent gingering and speckled with crumbs of shortbread and scotch egg, has been ordered to ‘get up to Edinburgh’ and ‘go on about haggis or something’.

“I had the idea when the previous Balls gave me a christmas card with a tenner inside”, revealed Miliband. “That’s just enough to register a change of name at the deedpoll office.”

Ed McBalls was chosen for scottishisation because he has a lot in common with Alex Salmond. “His head is pale, round and damp-looking, and he doesn’t like eating vegetables”, revealed Miliband.”He seems angry all the time and he smiles when it’s most likely to cause annoyance.”

“And to cap it all, they’re both incredibly bad at maths.”

“It’s amazing the difference a name makes, I should have wrapped my Balls in tartan years ago”, said Miliband. “It gives me a warm feeling, and should stop a big swing to the left.”

Ed Miliband was surprised at how easy the deedpoll process was, and hasn’t ruled out asking someone to help him fill the forms in again in the future. “They’re a fickle lot, the public. But if they really want to see a ‘David’ Miliband in charge, then I’m prepared to change. Mum will be pleased, she always said that one was her favourite.”