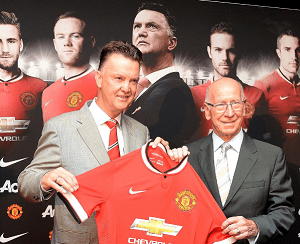 New boy Charlton is presented with his shirt

With at least 20 players crocked or hopeless, new manager Louis Van Gaal admitted that Manchester United’s injury crisis has meant some radical rethinking prior to this weekend’s match against West Ham.

As well as the inevitable call up from retirement for stalwart Ryan Giggs, the Dutchman with the Tefal head seems to have overheated his vast brain with his latest comments at the regular Friday press conference.

“Yes, we had to recall Giggs,” he said. “Ryan is fit as he ever was, and still works at his game which he proved last night when he made a pass at my wife.”

But a stern faced Van Gaal said he may have to cast the net wider. “Every week I see talent like Sir Bobby Charlton sitting in the Directors Box, and wonder if perhaps he could sit on the bench. We could use him as a low impact substitute.”

“Sir Bobby still has both his legs and he looks better than he did in 1970, although that’s mainly because he’s lost that ridiculous comb over. “

It was only when Van Gaal mentioned the possibility of digging up sixties hero, George Best, and commenting that he would have lost a little excess weight that the assembled press realised that the man with the largest furrowed forehead in the world was having a joke at their expense.

“That’s one of his best yet,” said one amused hack afterwards. “Although maybe not quite as funny as the time when he assured us that Chris Smalling was a world class defender.”