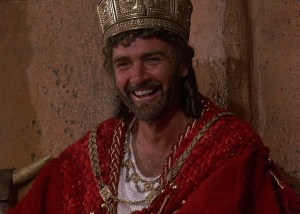 The man who would be king (caution: potential monarchs may be up to thirty-three years older than pictured).

Today Scotland goes to the polls to decide whether or not to go it alone or to give its loveless union with England another 300 hundred years for the sake of Wales and Northern Ireland.

If the vote goes with the Yes campaign then it is expected that Sean Connery will arrive from his home in the Bahamas this weekend in order to be crowned King of Scotland. It was understood that the new monarch would reside at Balmoral however reports are coming through that a tipsy and pre-emptive Alex Salmond has already moved in.

“We will win!” Salmond roared down the line when asked to comment on this story. “And Sir Sean, the greatest living Scotsman, will be king. And I’m very glad he’s coming home because the foundation of my economic plan for a new Scotland is doing him for millions upon millions in back tax”

One Response to Scotland decides: twenty-four hours until Connery is king?