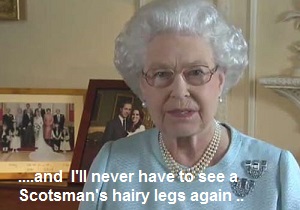 The Queen has made an astonishing attack on Scotland in a pre-recorded public broadcast only intended to be shown in the event of a ‘yes vote’ in favour of Scottish independence.

In the ten minute tirade the monarch slags off the Scots, their food, the weather and says how much she hates Balmoral Castle.

“The ungrateful people of Scotland have spoken and I am delighted that the power of the ballot box has meant that I never have to go to Scotland again,” she starts gently. “Frankly, I’ve never liked the place, the climate or the food.”

After a bitter complaint about the “god awful sound of bagpipes”, the Queen turns to her Scottish residence.

“’So what about Balmoral?’ I hear you ask. Well so far as I’m concerned they can stuff Balmoral where the sun doesn’t shine, which in Scotland is just about everywhere.

“The official line is that I love to spend my summers residing on my beloved Balmoral estate, but to be honest, I’d rather be on a council estate in Hartlepool than that midge infested bog anytime. Some of my unhappiest times were spent at Balmoral, like when that ghastly Tony Blair came to visit.”

“My great great grandmother only bought the dump so she had somewhere away from prying eyes where she could be shagged rotten by Big Willie Brown, her so called gamekeeper, who ‘comforted her’ after Prince Albert’s death.”

“Of course, I shall miss the Scottish people, but only in the same way that one might miss an attack of haggis induced gastro enteritis.”

It is understood that Her Majesty recorded another message – to be shown in the event of a no vote – in which she serenely thanks the Scottish people for their sound judgement, and calls for Alex Salmond to be sent to the Tower.