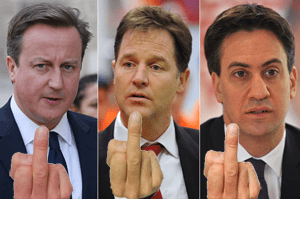 You can count the argument on one finger.

David Cameron, Ed Miliband and a small boy in shorts have promised to sell England to someone ‘swarthy and well-off’ to fund Scotland’s demand for a paradise.

While some in England may oppose such a move, no-one will know for sure because they don’t have a say in the matter.

Cameron revealed that England, on the other hand, has Westminster in it. “I’m afraid that lot are stuck with us, so they’ll just have to lump it.”

Ed Miliband agreed. “A referendum would be pointless, it would be like a child voting to not have a lung. The lung would still be there, whether or not the rest of the body resented it.”

“To prove the point, I boycotted my spleen just over a week ago. But it’s still there, doing whatever it is that it does. Feeding off the idiot cells that surround it, no doubt.”

Whether Scotland votes ‘yes’ or ‘no’ on Thursday they are now guaranteed a blissful life of ease and contentment, whether it be paid for with oil and fish, or by going through the pockets of the English.

“And if that isn’t enough for Salmond, we can make him our king”, added Cameron. “There’s nothing more important to those in Westminster than being seen to treat the majority of our subjects with contempt.”