New NHS parking charges introduced because Tories were paying too much 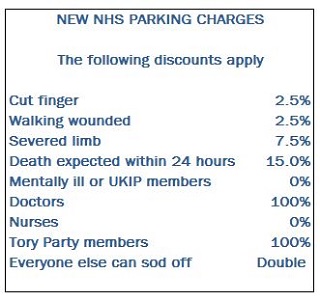 Stung by criticism of unfair parking charges at NHS hospitals, the Government has announced a number of discounts which will conveniently mean Tory party members enjoying free parking in future.

Revealing the changes, Secretary of State for Health, Jeremy Hunt said, “Top tax payers such as doctors and fellow Tories shouldn’t have to suffer the additional stress of having to pay for exorbitant car parking on top of the hassle of working at a hospital or having to visit relatives, too poor to go private.”

“Naturally, there will be parking discounts for the injured, ill or dying but everyone else can lump it, as we’re going have to fund the reductions by increasing the standard charges.”

Hunt, dismissed suggestions that those who can ill afford it are being penalised, “These people already get benefits left right and centre,” he said, “and if they’re really sick, they’ll get a free ride to the hospital in an ambulance.”

“And that’s another thing,” he added, “we haven’t ruled out charging for ambulance usage. It’s not some kind of taxi service. The NHS is supposed to be free ‘at the point of delivery’ not ‘including delivery.’

An anonymous opposition spokesman for Health said last night “Yet again, the Government has listened carefully to the public, and as usual, has totally ignored them.”