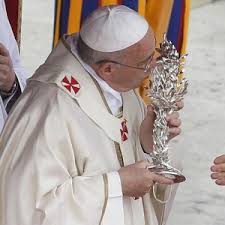 You can smell the real thing. This is solid silver, put it back in the safe

Pope Francis has condemned what he called the Mafia’s adoration of evil, saying the gangsters were now effectively excommunicated in the eyes of the Church.

A notoriously dangerous criminal organisation, with complex financial structures and a vast network of agents across world, the Catholic Church is keen to preserve its status as Italy’s ‘Number 1’.

The pope referred to the Mafia’s growing contempt of ‘the common good’, an area in which the Catholic Church has traditionally held sway. Former mobster Sal Polisi said “The pope is right to expose ruthless, greedy criminals. When he’s done that he should turn his attention to the Mafia.”

One Response to Pope criticises mafia and calls kettle black