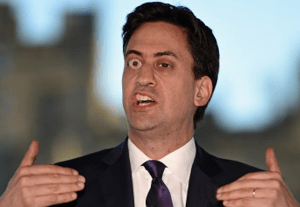 Miliband hopes to be loved by the nation as much as Blair is.

Ed Miliband has pledged to win back support from disaffected voters by adopting more of Tony Blair’s trademark hand gestures.

With the backs of his hands pushed out in front of him making a sort of odd scooping gesture, advisors insisted Miliband looked more statesman-like, more believable and more sincere.

“This one is called the ‘honesty gates'”, said Miliband, “I’m pushing them in your face. Can you feel yourself warming to me? The focus groups predicted that you would.”

Following a successful operation on his nose to stop him sounding like someone playing bagpipes in a mineshaft, Miliband will face further cuts to give him one trademark Blair ‘staring eye’.

“This shows I’m both keeping a watch on things, as well as being horrified by what I see”, he revealed. “Finger tips together, fake smile, and move on.”

“Sorry, I wasn’t meant to read that bit out. Can we do this again? What do you mean, my puppeteer’s gone off to get some coffee?”

Miliband then produced a cigarette, lit his thumb, before clumsily picking up a pint of beer and waving goodbye, soaking the front row of the press conference in the process. The Labour leader has promised not to try and imitate Nigel Farage in future.