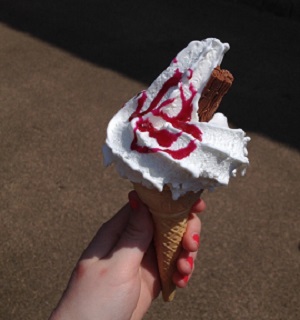 The family of a woman killed by a substandard ice cream has slammed police for the way they handled her case.

Wendy Barker called for help when she noticed her dairy adornments were dangerously lop-sided, but wasn’t taken seriously by official call handlers. Campaigners are calling for coppers to treat mistreated treats more professionally, or risk ‘getting monkey blood on their hands’.

“This poor woman experienced a very real and traumatising sprinkle crisis, only to be told by police to phone back if she’d been murdered”, claimed close friend Pippa Delaney. “There needs to be a separate number for these ice-cream based emergencies. Perhaps they could call it the Cones Hotline?”

Asked if there were a lot of incidents of this nature, Delaney replied ‘hundreds and thousands’.

Authorities have released a transcript of Ms Barker’s final call, recorded moments before she topped herself.

‘Hello, emergency services. Which service do you require?’

‘Ooh. I…I can’t quite…make up my…hmm. Can you just tell me again What ones you’ve got?’

Filed under Around Harold, Food, Law and Order