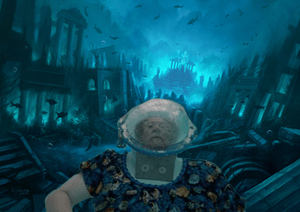 The City of Atlantis is struggling to cope with the sheer number of ‘climate change refugees’ pouring in from the West Country.

Once a quiet, moist metropolis with a bouyant economy, Atlantis now resembles ‘something from a Wurzels video’, according to one resident.

“They come down here with their rough cider, their red neckerchiefs and their lungs, and expect us to provide them with air”, claimed merlady Floella Kelp. “I wouldn’t mind, but some of them have brought accordians and leave sticky lumps of Stinking Bishop all over the place. I’m all for multi-culturalism but there has to be a limit.”

Karen Bilk is a first-generation migrant to Atlantis. She fled to the city hoping that it would be better at dealing with water than her home town of Bath.

“Since last November I’d pretty much been living underwater anyway”, said Bilk. “So I thought I’d be better off going somewhere with an interesting culture to immerse myself in.”

“But try as I might, I just haven’t managed to evolve gills and I’m stuck in this big, brassy helmet. That can make communication with the locals rather difficult.”

Bilk claims that since moving to a house 20,000 leagues under the sea, she’s been under an awful lot of pressure. “It makes my eyes bulge and it’s slightly altered the shape of my head”, she revealed.

Mayor of Atlantis Bob Gently claims that immigration is good for the city, but incomers should at least try and fit in.

“Don’t order fish in our restaurants, or try and start conversations about the weather”, said Gently. “And please don’t wear clothes that go all see-through when they’re wet.”

“But most of all, try and get a handle on how to use our ‘osmosis toilets’. The state some of you leave those in is enough to bring tears to our eyes. Not that we have tears, of course. That’s another disgusting habit we could do without.”

Comments Off on Climate change refugees flee Somerset for Atlantis