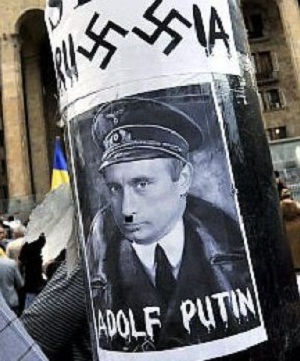 Despite the imposition of sanctions on his closest allies, it appears that German leader, Adolf Hitler remains resolute in his insistence that “The Poles had been asking for it for years and now that they had been invaded it was no use squealing and asking for help from a bunch of lily livered do gooders.”

The West’s reaction to the invasion has been powerful. Leaders have condemned the actions in the “strongest terms” and there is talk of ramping up their opposition by not going to the tea party that the Fuhrer had been planning to host, taking their knitting circle to dear dependable Mrs Belgium’s instead.

Whether such drastic action will be necessary will depend upon the effect of the sanctions imposed upon Hitler’s pals such as Himmler and Goebbels. Much of their accumulated cash is safely lodged in neutral Swiss bank accounts; but if Switzerland allows itself to be influenced by the West, sources close to the Nazis suggest a simple invasion of Swiss territory would soon bring them to heel.

The British Government has defended criticism that they are failing to learn the lessons of history. “On the contrary,” said one Whitehall insider, “they’re already gearing up for the Prime Minister to visit the Fuhrer in his own lair so we can come back and wave a piece of paper at a news conference. It seemed to work last time.”

Despite this, prospects for a withdrawal look bleak and it is quite possible that the population of the free world will be gathering around their radios one Sunday morning to hear the sombre words of President Roosevelt announcing that “America will have to brace itself for years of sacrifice as I have been given no choice but to impose an immediate ban on the import of vodka and caviar.”