Cameron admits: ‘I would vote UKIP’ 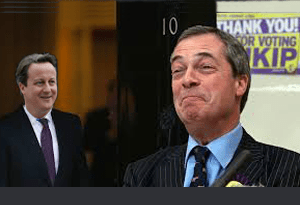 Cameron ‘would be happy’ to share Number 10 with Farage.

With just days to go until a TV debate between Nick Clegg and Nigel Farage, Prime Minister David Cameron revealed that he ‘would be happy to vote UKIP’.

“UKIP’s beliefs are remarkably similar to those of the traditional tory voter”, explained Cameron. “But they focus on the beliefs we wouldn’t dare admit to.”

Anti-Europe, anti-immigration and anti-foreign aid, UKIP ‘is like catnip’ to many members of Cameron’s cabinet. “Obviously, in public we have to denounce all of UKIP’s awful, bigoted policies”, said William Hague. “But that doesn’t mean that in private, we can’t try and vote them in.”

Nick Clegg reacted angrily to a supposed sleight by his coalition partner, but Cameron dismissed any suggestion that he was deliberately undermining him. “I would no sooner vote for myself than I would for the deputy prime minister”, soothed Cameron. “But it will be good to watch Farage debate my closet policies with him. They’re the issues that I got into politics for in the first place, so it’s about time someone finally brought them up.”

The revelation that Cameron is a closet UKIP supporter created a surprising surge in support for the tories, according to the latest opinion polls.

“I must admit, I’d considered voting for UKIP as well”, said voter Edna Morris. “But it made me feel a bit uncomfortable, what with them being full of openly racist bigots. But voting for a tory who would vote UKIP is an entirely different matter. It’s a sort of back-door way of hating muslims, gays and women.”

Mark Higgs, a builder who has voted UKIP in the past, explained why he was now also a tory voter. “Finding out there’s not much difference between the two parties comes as some relief”, he disclosed. “I was never entirely happy voting UKIP, there was always a stigma with my mates. They always thought it was mad voting for UKIP, what with their leader having a surname that sounds a bit foreign.”

Comments Off on Cameron admits: ‘I would vote UKIP’